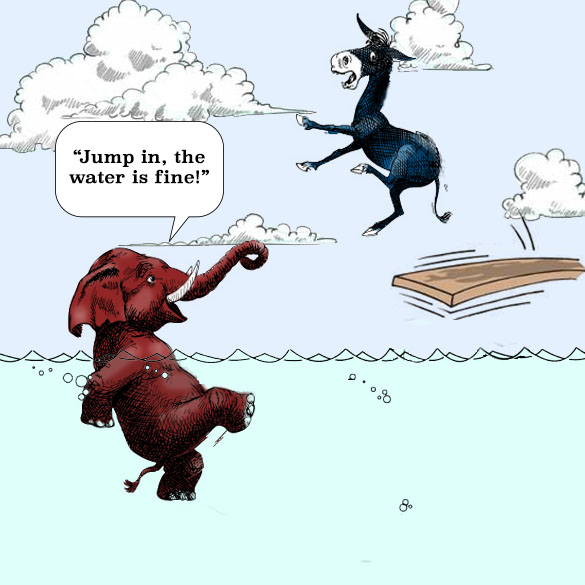 The recent government shutdown has brought to surface the fact that acidic internal divisions are rife in American politics.

In fighting and break away factions within political parties is nothing out of the ordinary but up on Capital Hill the Republican party of 2013 are demonstrating how extremists within their fold are trying to impose their views without thinking of any consequences.

Cracks in political parties usually begin with such ideological extremities taking it upon themselves to see their goals realised and we saw that with some tea party faithful in the GOP who succeeded in making a federal shut down a reality. Implications of this may see political allegiances switching for many Republicans.

Jumping from one party to another isn’t a new phenomenon in American politics, it is something which has served as a lifeline to many politicians wishing to gain re-election.

Candidates choose a political party that can enhance their chances of getting elected and Michael Bloomberg is an example of how political bed hopping drives the need for electoral success.

Bloomberg had been a Democrat supporter until he stood as a Republican candidate in the 2001 New York mayoral election which he won. He remained with the GOP until 2007 when he declared himself an independent.

Party defection is done when the candidate is in the mindset of what would be more beneficial for re-election but as we saw with Bloomberg who chose in the end to have no party affiliation, the choice to defy party politics in order to go it alone might reflect current public opinion.

Partisan bickering is more prevalent than ever and it damages public opinion of politicians and their respective parties but it seems the Republican party are coming off worse in the latest political grid lock in Washington.

Extreme factions within the GOP will without doubt hold back any plans that Republicans have to broaden their appeal in time for the 2016 presidential election.

Extremely conservative factions within the Republican party are showing how to dismantle and undermine a political party from the inside out.

Electoral demographics are changing in America and this was seen with the election of Barack Obama in 2008 and again in 2012.

The Democrat vote now extends to a broad base of voters including the youth, women and Latinos. Republicans are still sticking with a waning demographic which includes white older men and conservative Christians. Gaining women’s votes may be a hard fought fight for Republicans, especially if a certain former secretary of state decides to run in 2016.

Hillary Clinton is another example of someone who straddled the political divide. Before leaving for college she was chair of her local Young Republicans while in 1960 she worked on Richard Nixon’s presidential campaign and again in 1964 she returned to the campaign trail to support another conservative, Barry Goldwater.

It seems that her stint in college, as well as her meeting with Bill, would change her political leanings like many of her generation in the late 1960s, turning to the more liberally endearing Democrat party.

Obama’s call to end petty partisan politics in his inaugural speech in 2009 fell on deaf ears. America is more divided today than it was five years ago when such a plea was made on the steps of Capitol Hill.

Today also sees the two parties more ideologically defined than ever. Once upon a time the two parties were almost identical in their politics but these days there is no such thing as a liberal Republican or conservative Democrat.

The Reagan era would usher in a new wave conservatism which is still championed by many Republicans today yet Reagan himself wasn’t always devoted to the GOP.

In 1947 the then actor became president of the Screen Actors Guild. It was a time when McCarthyism spread the red scare in Hollywood and Reagan’s political leanings gradually turned to the right of the political spectrum.

Reagan’s conservative move was solidified when he married Nancy who was a staunch supporter of the Republican party and in 1962 Reagan officially gave himself over to the GOP declaring that he didn’t leave the Democrat party, the Democrat party left him.

Reagan’s Republican reign in the 1980s saw power for American conservatives at an all time high and one of the numerous defectors from the Democrat party at that time was one Condoleezza Rice.

In 1982 Rice found herself at odds with the foreign policy espoused by the Democrats and she joined the rising Reagan appeal of that decade.

Jim Webb served as secretary of the Navy in Reagan’s administration and was considered a rising star in the GOP yet by 2006 he was on Capitol Hill sitting on the Democrat side of the Senate.

While the 80s saw the rise of Republicans, 2006 would see a start in reversal of trends as demonstrated by the examples of Rice and Webb.

Because the political landscape in America is dominated by just two parties it isn’t all that rare for party switching to occur but surprisingly it was more common during the 19th century than it is today.

During the 1800’s party switching played it’s part in political parties taking shape and finding their footing on the electoral Richter scale but we are now witnessing partisan politics as bitter as it was in the 19th century.

Switching sides may be more of a political necessity rather than a choice of consciousness and in this age of party in-fighting on Capitol Hill it looks like the political landscape of the U.S should be setting itself up for a long haul in partisan conflict.