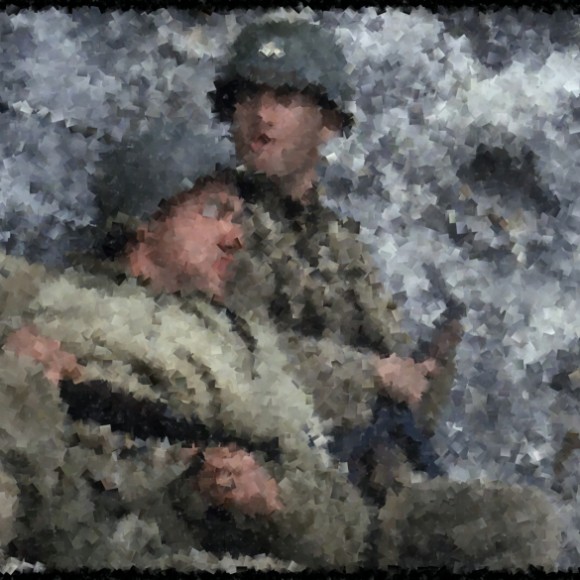 Pieces of earth turned into a cloud of dirt. Another blast quickly followed in its footsteps. The sky was thick with smoke, raining down tears of mud. Voices were lost in all the confusion. The world continued to vibrate and shake as two men ran for cover.

“How the hell did we walk into this?”

“We just did, Sam.” The soldier looked over his shoulder as another explosion rocked the earth. “We just did.” All he could see were giant holes laid out before him. There was no sign of life except for him and his friend.

“They definitely caught us off-guard, John.” The other soldier slid into a foxhole and started to reload his rifle.

“What do you think you are going to do with that?” John now stood beside him, sheltered from the attack. “They haven’t fired at us yet.”

“They will, John. Give them time, and they will. In the meantime, I am not sitting here and waiting to die.” He stood up with his rifle ready.

“And how the hell do you know that?”

“Because we’ve been here before,” John responded.

“No, we haven’t. And if we did, we would not have walked right into that ambush.” Sam shook his head. “There’s not even a sign of life from our unit. They were probably all obliterated.”

“They don’t exist? I think that last blast knocked something loose, John.” He paused for a moment. “It stopped. The damn explosions stopped.” He stuck his head out and looked around. “Where did they go?”

“They don’t exist,” John replied. He sat down on the ground and tossed his rifle aside. “We always get to this point.”

“I have half a mind to knock you out and carry you away from here.” He hovered over John. “What is wrong with you?”

“My world is falling apart.”

“No kidding. There’s hardly enough ground to walk on out there.” He resumed scanning the area for hostiles. “We should move soon, John.”

“And go where? I would rather stay here. It’s quiet here.”

“What has gotten into you?” He pulled John to his feet. “Snap out of it, soldier! We were just under attack!”

“Because I dreamt it, Sam! I dreamt that somebody was bombing the hell out of us!” He pushed Sam away from him. “And now, they’re gone. They left! This is the world left!”

“What the hell does that have to do with anything?”

“Because it does, Sam. It does. What is your last name?”

“I’m not telling you.” He started to climb out of the foxhole.

“You don’t know it, do you?” He turned to stare at John. “You don’t have one because I never gave you a last name.” Now Sam was standing a very short distance away from him. “I’m right. Aren’t I?”

“Okay. Let’s entertain your crazed notion that this is all a dream. If I shoot you, will you die or wake up safe and sound in a bed somewhere?”

“No. You can’t shoot me because your rifle is empty.”

“I just loaded it!” Sam checked his gun to find that it was empty.

“I told you that it was empty.” He watched Sam toss the gun aside. “It’s quiet here.”

“You said that already. Okay. Let’s say that this is all a dream. Why? Why are we here?”

“Because we just are.”

“Well, was the attack, the ambush necessary? I mean… What the hell? You could have blown me up, man.”

“But I didn’t.” John sat back down on the ground. “It’s just the world falling down around us, around me.”

“Well, how about next time you dream of a happy place? How about you and me kicking back in Hawaii or something?”

“Need me? You almost killed me, and for what? What, John? What the hell is this?” Sam sat next to him. “What?”

“No. You don’t get it. Every time I get close to the world, it slips away or is ripped away.” He looked at Sam. “I’m only seventeen.”

“You look older,” Sam replied. He then burst out laughing, and John joined him. “Seventeen? Jesus, you’re a kid. And the world? The world should be ahead of you.”

“If I was popular. All I’m dealing with in school is being an outcast, and all I am dealing with at home is, ‘What are you going to do with the rest of your life?’”   He kicked the ground before him. “I hate it. I hate not knowing what I am doing or where I am going, and I am so tired of people tearing down my world. I am tired of rebuilding it just to see it torn down again.”

“So you blow the world all to hell?”

“Basically. It makes me feel better. I don’t know why, but it does.”

“So you come here?” John nodded. “And what am I, John? Your conscience?”

“So, let’s crack a beer open and talk, or I’ll have a beer. You can’t.” Sam smiled at his comment.

“We are talking,” John replied with a smile too. “Besides, you’re right. I can’t drink. I’m too young.”

“Jesus, John. I don’t think anyone will card you here if you wanted a beer. Not a soul for miles. Actually, eternity, I think.” He laughed at that, but his laughter died quickly. “What happens to me when you wake up?”

“So how often do you do this?”

“Thanks, Sam.” He stood up from the ground. “I have to go. The alarm will be sounding soon.”

“I don’t know, Sam. I don’t have any answers.” John started to climb out of the foxhole. “I never do.”

“So you’re just going to leave me here? Alone?”

“You’re not alone, Sam. You’ll never be alone.” When he looked back over his shoulder, Sam was gone. “You just go home.”

An explosion rocked the ground. John flew backward into the foxhole. He landed on his back, hard. His eyes stung, and his ears rang. He started to sit up when another explosion sounded off. He jumped up, finding himself back in bed.

John silenced the annoying alarm. He pulled himself out of bed. He raised the blinds on his window and looked outside. His eyes fell on the backdrop of a small town. Trees moved in a gentle breeze, and birds sang in greeting. But he did not smile. Instead, his hand pressed against the glass, yearning to touch the world outside, but all he felt was cold. Maybe, one day, he would feel the warmth instead.