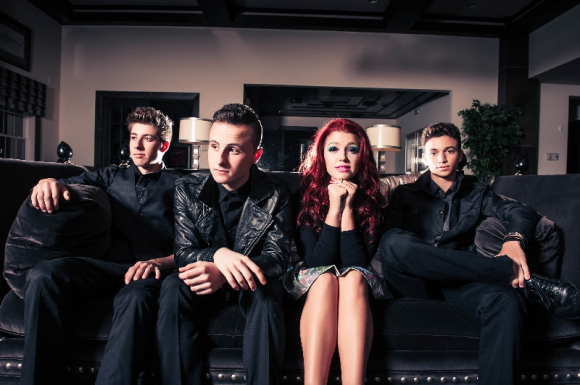 Another awesome multiple-eras-inspired song, Cleopatra Club’s new single “Pray” brings back all the fun of rock and disco, with an unusual though intriguing overlay of Christian allusions and tones. The band adds, “Lyrically it wasn’t a personal experience, but we wanted to touch on the theme of forbidden love and temptation, and all the feelings people go through with that, and we wanted people to come away with different perspectives. Musically, it uses consistent influences of the song Girls from the band 1975.” While they explain that the song initially began as two separate songs, they later wonderfully weaved it together into an electric, vibrant pop-rock song that masterfully blends several eras of music. Strong lyrically, instrumentally and vocally — as well as catchy — this is an exciting and surprisingly mature release for the young band; a must-watch for fans of Michael Jackson, Ariana Grande, the 1975 and more, as well as for anyone who has been looking for something original and “radio-ready.”

Looking to their origins and energy, I sat down with the band to ask them a few questions. Confusingly, they admit, they came together as a mixed group of acquaintances and close friends, but that their line up was solidified when they played at a benefit show. They explain, “that after we played [there], we had this energy that we didn’t want to go away. After that it has been a blur.” Quickly, they realized that they needed a band name, Matt, who shortly thereafter went on a trip to Italy, was inspired by “these performers with an Egyptian theme who kept popping up. With a female singer, we wanted to keep that theme and brought it together with the addition of the name Cleopatra.” As everything came together, they found their influences to be excitingly disparate, creating a band that blends Bruno Mars, Justin Timberlake, Mel Rogers, the 1975, to name a few. Altogether, they have created a band that will truly appeal to fans of both old and new pop-rock. Ultimately, their vision is to be truly alternative, but also entertaining: “Our music scene in New Jersey is stagnant. The people who really inspire us are not complacent. We try to show that through everything we do whether thats album artwork.”

Looking to the future, they suggest that their current goal is “to get signed, to tour, to expand our fan base, and at the very core, add to music.” Excitingly ambitious, I am excited about this band, and eager to follow them as they grow. If you loved them as much as I did, be sure to check out their site, especially as they will be releasing music videos to each song on their new EP “Neon Collection.”