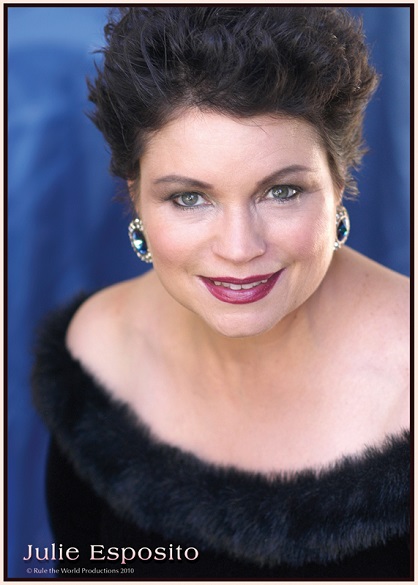 Old Hollywood comes alive in the voice of Julie Esposito as she reinterprets a few of the film industry’s lesser-known gems. “I am too young to be old Hollywood,” she says, “but I guess I have always had an old soul.”

The songs Esposito features in her 2007 self-produced album, Unsung Hollywood, include the whimsical and the romantic, some from as far back as the 1920s and 1930s. Indeed, an album standout, “Little Jazz Bird,” was written in 1923 and omitted from the 1947 film Lady Be Good. This track in particular embodies the benevolent cabaret style of Prohibition-era speakeasies and jazz clubs with lively horns, deep piano, and Esposito’s slightly sardonic tone.

One of the newest tracks Esposito croons called “What Can You Lose?” comes from Dick Tracy, a 1990 film crafted in the style of a 1930s detective drama. Several reign from the 1960s and 1970s; one lively track, “Journey to the Past,” even originated in Disney’s 1997 cartoon Anastasia. The most important common denominator in this collection however, according to Esposito, is the fact that these lovely works are generally underappreciated and overshadowed by more iconic numbers.

“I have ALWAYS wanted to sing the songs that I felt were underrepresented,” she said in an email, acknowledging her love of music and singing from the tender age of three. She attributes her uncompromising, spunky attitude to her mother’s politically-minded family and her artistic tendencies to her father’s family of musicians. She herself lives somewhat of a double life these days: lawyer by day, performer by night. “[I] want to fight for the underdog as a lawyer,” she said, providing an integral connection between her passion for her profession and her motivation for creating Unsung Hollywood.

Esposito reveals in the album notes the personal strength she gathered from the production of this collection. Although the songs were written in very different times and for very different purposes, the singer discovered a grain of truth in each of them.

“I am deeply grateful to the composers and lyricists represented,” she says. “[They] have enabled me to voice that which I feel I must say.”

She embodies the idea that music expresses that which can’t merely be spoken, and the great power that a meaningful song can have to unite people and excite human sympathy.  Track “If I Love Again” is highlighted in the album notes as being particularly emotional and important to Esposito.

“It is a song that has meant a great deal to me over the years,” she says, also paying tribute to its versatility and revealing that the song functioned as a Broadway piece in 1932’s Hold Your Horses and as a film track in 1974’s Funny Lady. It’s certainly one of the album’s more melancholy tracks with the addition of beautiful piano playing by Shelly Markham; Esposito’s voice is allowed to fill all empty space with the richness and sweetness of honey.

The album holds not a single boring, intolerable, or bad track, a result of the timelessness of each song and Esposito’s perfectly suited talent. The collection, full of hope, wonder, and freedom, pays a lovely tribute to a few of the film and theatre industries’ finest works, while sending listeners on a journey through the life and psyche of one of the industry’s finest performers.