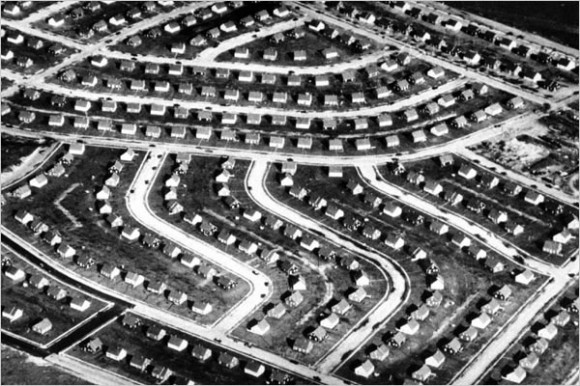 A few months ago, I wrote a movie review on The Giver. While I was writing that review, I struggled to see the wrong in a colorblind and homogenous society devoid of conflict as seen in The Giver. I ended up arguing that the “wrong” in the society was the giving up of control, freedom, and personal choice for the sake of safety. I didn’t really give much thought to the movie after all was said and done until I saw a video clip in my race and ethnicity class of a newly created suburb after World War II. This real-life neighborhood looked eerily familiar to the neighborhood Jonas and his friends inhabited in The Giver.

After seeing the clip, I realized that complete government control is not the problem in The Giver. The problem The Giver presents is that of a colorblind and homogenous society. A homogenous society was actually attempted in real life immediately after WWII, not to eradicate conflict like in The Giver, but to eradicate diversity. The movie presents a colorblind society as positive, a popular viewpoint today aimed to erase the damage done by centuries of blatant racism, but a colorblind society completely ignores that long history of racism and its effects on current race relations.

The Servicemen’s Readjustment Act of 1944, or the G.I. Bill as it is informally known, was passed to help World War II veterans start over and adjust to a changing America. It gave soldiers benefits ranging from low-interest loans, one year of unemployment compensation, cash payments to attend college, and most importantly, the ability to take out low-cost mortgages. With these mortgages, veterans were able to build and buy new homes in the emerging suburbs. The only problems—these benefits did not extend to African Americans or any other soldier of color who graciously provided their service in the war nor were black neighborhoods invested in due to a practice known as redlining.

When blacks tried to live in the newly formed suburbs, they were immediately shunned. Whites moved away from the neighborhoods that blacks moved into, leading to the decline of the neighborhood, not because of the presence of a black family but because the absence of the privilege and resources of white families. As a result, black presence severely undercut the real estate value in these communities. Additionally when whites left, they sold their houses to blacks at an inflated price, so blacks gained no equity by paying rent. The homes depreciated, leaving blacks in further debt.

Today, a black family has 1/8 of the net worth (calculated as what you own minus your debt) of a white family—the difference being the value of a home—the resulting legacy of the G.I. Bill and redlining. This disparity in net worth is huge because it accumulates from one generation to the next and becomes a starting position for the next generation.

So when people ignore history when analyzing racism today, they fail to see how much of an impact it has had in creating the inequalities that exist today. In the end of the The Giver, the colorblind society falls, showing us that a colorblind society doesn’t work because the quest for equality ended a long long time ago with the country’s quest for a homogenous society.