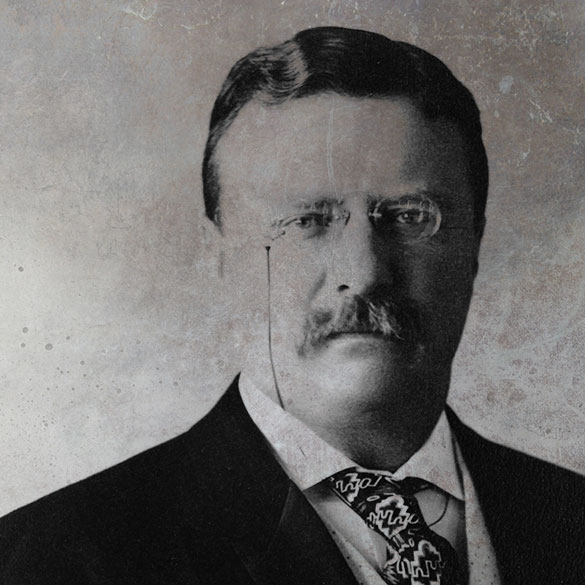 I declined to adopt the view that what was imperatively necessary for the nation could not be done by the President unless he could find some specific authorization to do it.

My belief was that it was not only his right but his duty to do anything that the needs of the nation demanded unless such action was forbidden by the Constitution or by the laws.

Under this interpretation of executive power I did and caused to be done many things not previously done by the President and the heads of the departments. I did not usurp power, but I did greatly broaden the use of executive power. In other words, I acted for the public welfare, I acted for the common well-being of all our people, whenever and in whatever manner was necessary, unless prevented by direct constitutional or legislative prohibition. (420-21)

By accident Theodore Roosevelt became President in September 1901, upon the assassination of President William McKinley. Having achieved his lifelong lust for power, he then proceeded to lay the foundation for the Imperial Presidency. An edifice of ever expanding presidential power next was constructed by many of his successors. And now, in the opinion of many, the Imperial Presidency threatens all of our civil liberties because it is contrary to the system of checks and balances which was designed by the Founders in 1787 at the Constitutional Convention in Philadelphia. Characterized by his contemporary Oliver Wendell Holmes Jr. as a “pretty unscrupulous politician,” who “doesn’t give a damn for the law” (542), during his presidency Theodore Roosevelt was relentless in seeking to expand presidential power, as is shown by his own words set out above.

Roosevelt’s reputation is well known for being an Imperialist in foreign affairs and for also expanding the U.S. Navy into a global military force. He foreshadowed his ambitions regarding world affairs in his first annual message to Congress in December 1901. There he defended the United States’ acquisition and domination of Puerto Rico, Hawaii, and the conquered Philippines. (429) Filipinos at the time resisted and opposed the replacement of their previous Spanish overlords with American ones in a War which did not end until the summer of 1902. His plans for projecting Naval power culminated in the historic fourteen month long circumnavigation of the globe by the Great White Fleet of sixteen battleships starting in late 1907. (611) He also achieved the construction of the Panama Canal, which he used to put the United States on the world stage by this demonstration of American industrial power. But, to accomplish this goal, he engineered a revolution in Panama to separate it from Colombia, which was seeking too high a price in the negotiations for the Canal Zone. His actions there were so illegal that when his Attorney General was asked by Roosevelt to give a legal justification for them, the reply was that there was “no taint of legality about it.” When Roosevelt then asked if he had answered the charges of illegality which had been lodged against him, his War Secretary also replied: “You certainly have, Mr. President. You have shown that you were accused of seduction and you have conclusively proved that you were guilty of rape.” (488) Besides Panama, he also intervened with troops in Cuban domestic affairs and opened up the Caribbean nations to American troop involvement for the next 100 years.

On the domestic front Roosevelt admirably sought to make corporations more accountable to the community at large, to regulate railroads as public servants with rates fair to all shippers, and to scrutinize banks more carefully. He also recognized the need for collective action for workers, to the consternation of his business class Republican supporters. “Very great good has been and will be accomplished by associations or unions of wage-workers, when managed with forethought and when they combine insistence upon their own rights with law-abiding respect for the rights of others,” he wrote to Congress. (428) He also set in motion further protection of forest reserves and natural resources for future generations.

His domestic expansion of presidential power is illustrated by the spring of 1902 coal miner’s strike. This was long before laws were passed allowing the President to act in similar economic emergencies. In a world in which nearly everything ran on coal, a winter without coal would be devastating to business and cost human lives. After learning from his Attorney General that the he had no constitutional power over the strike, absent a breakdown of order in the coal fields, Roosevelt nevertheless acted in September as winter approached. He invited the intransigent and Neanderthal mine operators, and John Mitchell for the mineworkers, to meet with him and each other. (451-56 ) The arrogance of the mine owners is reflected in this statement by one of their leaders.

The rights and interests of the laboring man will be protected and cared for – not by the labor agitators, but by the Christian men to whom God in His infinite wisdom has given the control of the property interests of the country, and upon the successful Management of which so much depends. Do not be discouraged. Pray earnestly that right may triumph, always remembering that the Lord God Omnipotent still reigns, and that His reign is one of law and order, and not of violence and crime. (457)

The mediation was an abject failure in the face of such intransigence. So, without legal basis, Roosevelt quietly prepared the Army to seize the coal mines, and he had his Secretary of War speak with J.P. Morgan as an intermediary with the mine owners. Through Roosevelt’s personal efforts, finally a way was found out of the impasse, the miners returned to work and in the end they received a ten percent pay raise and the general public was protected. “It was essential that organized capital and organized labor should thoroughly understand that the third party, the great public, had vital interests and overshadowing rights in such a crisis as that through which we have just passed,” Roosevelt concluded after this unprecedented exercise of his presidential prerogatives. (462)

While he was a Republican and claimed to be a political descendant of Lincoln, Theodore Roosevelt did almost nothing to fulfill the promises to the Black race for which Abraham Lincoln died and Ulysses S. Grant labored in his battles with the Klu Klux Klan. It appears that he was not an advocate of presidential power when it came to race relations. He garnered no votes in the Democratic South of the Old Confederacy since Republicans and Blacks were marginalized politically in that region. But White Republicans did hold influence in the nominating conventions of the Republican Party, which never fully had embraced Roosevelt who was considered to be an uncontrollable outsider. However, Southern convention voters generally were racists who had to be appeased.

So as part of his political strategy, it appears that Roosevelt did little if anything to advance the liberation of the Black race, despite the Bully Pulpit which he used during his presidency in so many other areas. Instead, Roosevelt basically deferred to White Southern opinion on the race question. So as not “needlessly to excite alarm and resentment,” he also appointed few Blacks to government office in the South. While he overwhelmingly appointed Whites and even ex-Confederates to office, he still was pilloried by Southern racists whenever he did select an occasional Black. On lynching, which was the primary tool of terror in the South, Roosevelt also was ambivalent. He cautiously spoke on both sides of the issue, and shamelessly even defended lynching in some instances while on the other hand pointing out its detrimental effect on civilized society. (496-500)

But, to quote the author of this thorough and highly readable biography, power does “tend to intoxicate.” (558) And so, in August of 1906, Roosevelt made himself a laughingstock by a vast overreach where he sought to reform the rules for spelling in the English language. Some contemporary academics argued that Americans spent too much time learning spelling and their proposed reforms could shorten sentences and save up to one sixth in the length of books and other periodicals. Searching for things to do, Roosevelt liked the idea and then ordered the government printing office to adopt revised spelling rules for a core list of 300 words. But the Supreme Court quickly threw out Roosevelt’s imperial order as it applied to Court publications. In Congress the President then was roasted “as a czar who would dictate to the American people on a matter so personal as how they communicated, a hornbook tyrant who was attempting to usurp authority that by no stretch of constitution or imagination lay within legitimate presidential purview.” Roosevelt unhappily backed down in the face of such opposition and other journalistic mockery like: “Nuthing escapes Mr. Rucevelt, No subject is tu hi fr him to takl, nor tu lo for him to notis . . . he will reform the spelling in a way tu soot himself.” (557)

After recounting his entire life and his two terms in office which ended in 1909, the author’s conclusions about the consequences of this presidency are significant. Theodore Roosevelt —

set in motion the expansion of federal authority that became one of the hallmarks of American politics during the twentieth century. Roosevelt established the principle that the people of the United States, acting through their government, have a right to regulate the private economy in the public interest. Under Roosevelt the exercise of this right took such forms as antitrust suits, consumer protection laws, maximum rates for railroads, and federal stewardship of natural resources.

He was the first president to clearly grasp the potential uses of American power in the world beyond American shores. . . . Roosevelt’s successors would elaborate enormously upon the principle he established, until the United States found itself burdened with the defense of countries and governments all over the globe. . . . He would never have questioned the assertion that enlightened countries like the United States have a special duty to enforce civilized behavior on countries not civilly inclined of their own. (813-14)

Professor Brands in this lengthy book in part addresses the roots of the current Imperial Presidency, the precedents for the continual expansion of presidential power and the diminution of Congressional checks and balances of the President. His work is a lucid, thorough and insightful biography of a crafty politician and his rise to and exercise of power, both domestically and on the world stage. It also documents his role in the slide of the United States into the First World War, and thus its inevitable Second World War aftermath.